A couple of pints please

I came in on Monday morning and checked the kiln to see how much water had come out of the wood over the weekend. I was really surprised, as there was half a bucket, which was about a couple of pints.

I checked the moisture content of the wood, and it has dropped down to about 11%. This is a good enough level to allow me to start to machine the wood up closer to its final thickness, and then putting it back in the kiln to dry out a bit more.

The long and short of it is, that by Wednesday I was ready to take the wood to the final dimension and actually start to make the table!

For the last few days I have been doing the joints in the table that actually hold it all together. As there are thirty-six components in the table (excluding the pieces that make up there drawers, and that is another thirty-two), I guess you can see why I am still doing them today!
Posted by Jonathan Pearce at 17:40 No comments:

A delivery of wood

I had a delivery of Ash turn up today. It is for a Hall table and a matching wall mirror.

It was sent to me from the merchant who is just outside Bristol. The lorry that delivered it was big enough to move a couple of households. The wood itself was all packed up safe on a pallet.

Being English timber, the wood normally arrives waney-edged with the bark left on. I could feel that the wood was still a bit damp, as it is air-dried timber. Wet wood is no good for making furniture, so I need to dry it out a bit. Here is my plan of attack.

The first stage is work out the best way to get the components from the wood – keep wastage low, get the best grain pattern etc. I know all the dimensions of the components, so it just means looking at all the wood and making a judgement call.

Next stage is to rip off any bit of bark, sap etc, as there is no point in keeping them on the wood. There is a big bag of firewood in the workshop now up for grabs!

As the wood is still damp, about 14% moisture content, and needs ideally to be at about 10%, the final stage of my plan is to put the wood in our kiln for a couple of days. Now this isn’t the sort of kiln most people think of – the sort used by potters for firing pots. This kiln is rather less violent and doesn’t require loads of heat! Basically the kiln we use for drying wood is a big box made from chipboard. Inside the box you place the wood to be dried. Here is the clever bit. Also in the box is a dehumidifier. Nothing special, just like the ones that can be purchased at local DIY superstores.

Once the kiln is sealed up, the dehumidifier will suck all the moisture out of the air, which causes moisture in the wood to replace that lost in the air. Hence the wood gets dry.

I will leave it running over the weekend and check on Monday to see how much moisture the wood has lost.
Posted by Jonathan Pearce at 16:17 No comments:

You can hear a pin drop

You could hear a pin drop? In other words it has all been very quite here on my blog for a while.

It doesn’t mean that I haven’t been busy though. Sit back and I will tell you what has been going on.

So in my last post, I was talking about making the handles for my tallboy. So by using some card, I came up with a shape that was happy with. Next I had to make the actual handles out of wood. 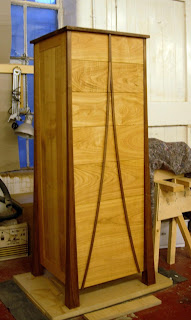 You can see what I mean…it just isn’t right for the piece.

I needed a rethink. Rather than worrying about it, I just put some blankets over the tallboy and forgot about it. Let ideas run around in the back of my mind for a while, and get on with making something else.

I have always wanted to make something that is coopered, i.e. similar to the construction of a barrel, but without actually making a barrel!

James Krenov is always making cabinets with coopered doors, and as I am a bit of a fan of his, then I thought that I will have a go.

I had some American cherry left over from making the drawers in the tallboy, so I decided I would use that. Also I wanted to cut some dovetails on my Woodrat, and that lead to the design of having the carcass sides dovetailed together.

Anyway, if you want to see some picture of it, you can check out the cabinet on my gallery pages.

After making the cabinet, I knew the solution to the tallboy problem. I should have stuck with my initial idea of routing a handle into the drawer fronts rather than changing my mind half way through and wanting to make an applied handle.

What I came up with was to route an elliptical handle in the drawer fronts. The down side was that I will need to make another set of seven fronts!!

A trip to the veneer merchant and a nice bundle of cherry veneer under my arm (and somehow a new mobile phone – I am easily side tracked) and I could then get to work making the final set of fronts get getting the project finished.

Well here it is. The completed tallboy with the new drawer fronts. 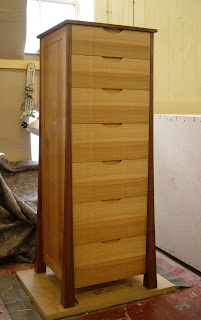 At least I am now happy with it.
Posted by Jonathan Pearce at 15:01 No comments: